A campaign for Rally Round the King

I start a Rally Round the King campaign. It takes place in the Annürien Marches.
I already have painted figures for orcs, goblins, Demeskeen (Saracen) and Border Kingdoms (Norman) armies. I'll only use the RRtK's campaign system for painted armies.

If you don't know RRtK you can read a good game's review here and interesting after action reports on Shawn's blog (in english) and on Olivier's (in french).

Now, let's have a look at the Annürien Marches. 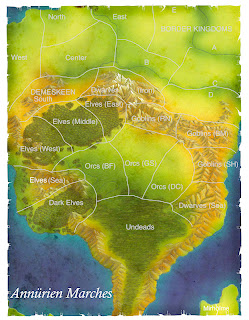 Here are the realms at the campaign's starting point in spring 382.

Below are the starting provinces and the leaders. There is a civil war between orc tribes in spring 382. 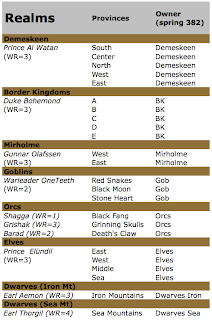