After his crushing victory against the Border Kingdoms, Prince El Osman forces them to sign a peace (for two years). In fall 382 the Demeskeen are again at War (RRtK, p.58). The only reachable opponent, not at peace, is Mirholme's foothold in the Border Kingdoms. Prince Osman sends his skirmishers to scout. They report a rough terrain. Maybe overconfident, the Prince decided to attack.


THE BATTLE
With no room to maneuver his cavalry, Prince Osman deploys his troops in a small space. 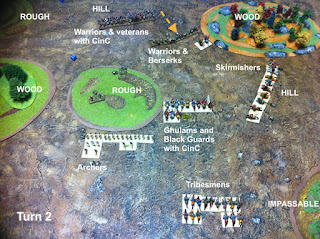 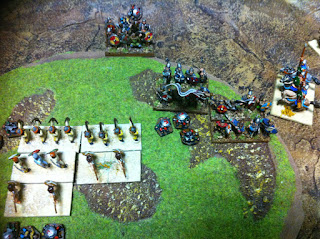 The Ironmen keep their foothold in the Annürien Marches for the moment.
The Demeskeen should come back since they are in peace with the Border Kingdoms and the Ironmen province is the only one where the Demeskeen can expand their empire...