The following scenario for WH:AA describes one such raid.

Three bands of Dark Elves seek to assert themselves by plundering as much as possible the peaceful village of CERULIAN. The Duke of Alahan has dispersed his troops on the border villages to ensure their protection.

The Dark Elves
Each band comes from a different table edge.
The composition of the three bands is identical:

The winner is the player with the most points out on his table edge.

Activation
If a double is rolled with activation dices :

- the player rolls on the Random Events Table


- BUT the player controls all the guard of Alahan for this activation! 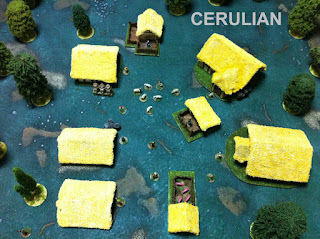 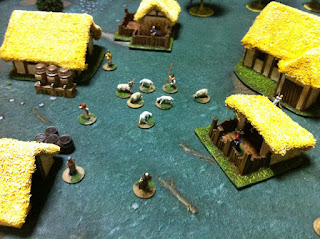 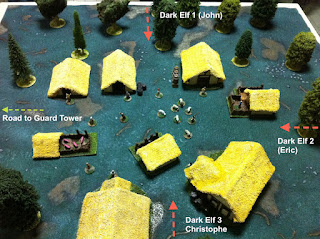 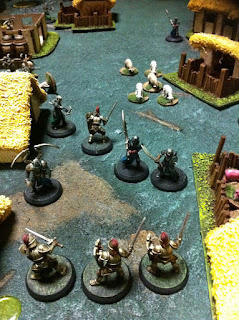 I ran this WH:AA game with four players (3 Elves and one guards/villagers) and it was a lot of fun with an Elf (Eric) coming back to his clan with 25 victory points (the next player has only 15)! Only two Dark Elf soldiers (Eric's) out of 21 were wounded/killed. Ten guards were wounded/killed and five fled.

Two players played WH:AA for the first time and enjoyed the game, especially the chaos created by reaction tests. They have only trouble with the firing rules (I think they will prefer Swordplay firing rules).
The figures are 28mm Rackham repainted and the houses have been scratch built by John.

It's always a pleasure to play Warrior Heroes: Armies & Adventures.