What is BattleLore?
From BGG :
"This game is based upon Richard Borg's Command and Colors system. The world of BattleLore meshes history and fantasy together - putting players in command of an array of miniature troops on the battlefields of a Medieval Europe Uchronia at the outset of the Hundred Years War.
Drawing on the strengths of Memoir '44, this Days of Wonder game takes the time-tested Command and Colors system to a new level and offers gamers of many backgrounds a chance to fight medieval battles with a dose of epic fantasy.
In this fantastical re-imagining of the Hundred Years War, French and English armies are supplemented with Goblins and Dwarves mercenaries and even some creatures like the Giant Spider and the Earth Elemental! Just as important as the armies you have, though, are the Lore Masters you choose to aid you: Wizards, Clerics, Warriors and Rogues can all aid you with unique powers and spells in ways role-playing gamers will find familiar."

Maybe because it's fun:
"Fun from games arises out of mastery. It arises out of comprehension. It is the act of solving puzzles that makes games fun. With games, learning is the drug."
Raph Koster, A theory of fun for game design (2005)

If we talk about game design what are the main game dynamics of BattleLore?
What is the hidden structure that makes the experience enjoyable?

- meaningful choices and BL is all about that (should I attack on my left front with my Ogres or do I call back my heavy cavalry?) ;
- emotions: I killed his giant spider! :-) / he killed my giant spider! :-(
- sense of accomplishment, the emotional reinforcement that pushes people to play more to master the game (don't forget to support your units!) ;
- narrative: BL is full of narrative with a very fun alternate history of the Hundred Years War (with goblins, trolls, etc.) ;
- progression: with each game you learn how to use more and more different units, magic, new terrains, etc.

This game is a masterpiece. :-) 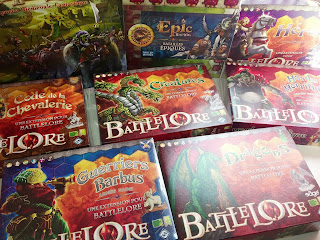 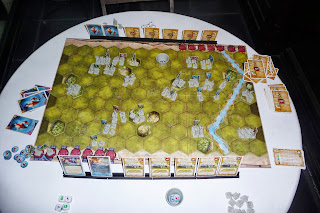 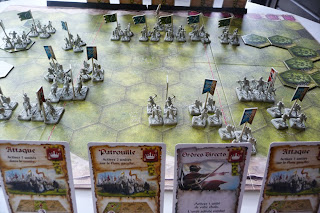 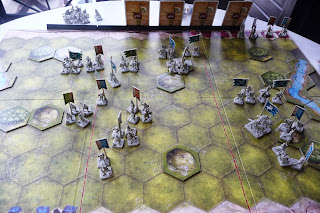 Still working hard, I find some time to play with my son and nephews: some very shiny moments! 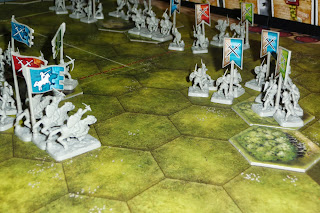