Gunfight in the junkyard (5150:NB Campaign)

After having questioned the surviving members of the Junkers Gang we know that the man responsible for the murders is Kyl Vargo, the head of the gang. He's probably a metal maniac (5150:NB, p. 100) and a menace to society, so the 5150 law is in effect (p.93).


When he is spotted by a surveillance drone in a junkyard, Sean Cooper leads a SWAT team to capture him... ENCOUNTER # 3 of the Campaign (first encounter of the month)


ENCOUNTER NAME:  Gunfight in the junkyard

The mercenaries have to bring back Vargo Dead or Alive…
They are com-linked and have bulletproof vest.

DEPLOYMENT
The Police arrive by air-car.
Two Junkers PEF in the garage (a two room building).
Two PS PEF in the area.


Generating an other PEF (PEF3 not pre-generated).

Nobody can exit the air-cars since they moved in the turn (p.64).


Sean & Mike Tao advance as all the SWAT members (all in the same time since they are com-linked) and discover PEF1 & PEF1bis. 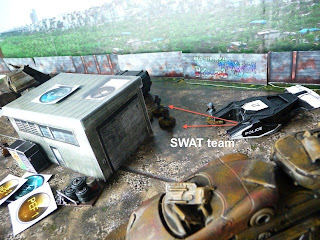 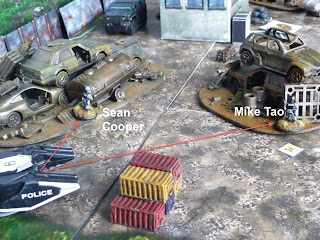 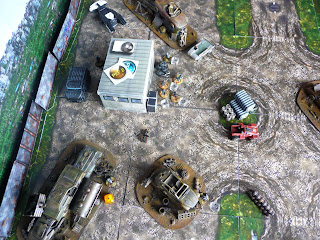 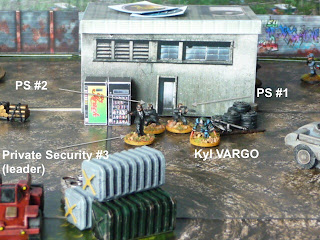 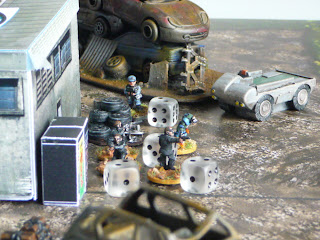 Since the Bad Guys were all outgunned they surrendered.

AFTER ACTION
Because of the bad weather (and the SWAT team), the assault has been brutal and a real surprise.

All the Bad Guys met the Wheel of Justice (p.89). The two gangers involved in Feist's death were sentenced to death penalty. The offenses listed for the mercenaries were Disturbing the peace, Brandishing a Weapon, Endangerment. They can negotiate if they answer police questions (first of all: why helping Kyl Vargo?)...


Minor Success: Andy is back! He'll be a valuable asset for the next installment...


QUESTIONS:
- who are the mercenaries?
- who their employer is?
- why they looked for Kyl Vargo?
- who really is Kyl Vargo?